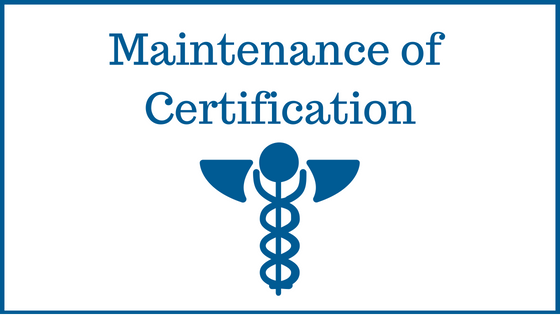 After reading this article, we ask that you take a few minutes to complete our survey on Maintenance of Certification.

Maintenance of Certification (MOC) is a well-known term in the medical community. It refers to the continuous process physicians undergo to learn and advance professionally while maintaining their eligibility to be board certified in their given specialty. The concept behind the board certification is that it is a professional credential, communicating to patients that a physician has maintained and advanced their knowledge to include the most up to date standard of practice and patient care.

MOC usually involves an ongoing measurement of six core competencies, which provides for:

While all physicians agree that we should do our best to provide high-quality care to all our patients, the concept of MOC contributing to that standard has divided the physician community into two groups, those for, and those opposed, to MOC. This article will briefly try to give the perspective of both viewpoints of this hotly debated topic.

The American Board of Medical Specialties (ABMS), which is the body that sets the standards for physician certification, believes that MOC is a necessary component to improve quality of care and patient safety. This comes from the belief that while it is essential to becoming a board-certified physician after completing residency, to show you have obtained the knowledge and skill set to practice high-quality patient care, this initial certification is not sufficient to maintain that competency throughout their entire career. The concept of the lifelong learner plays an active role, in that it is not adequate to rely solely on what you have learned, but to continue to expand that knowledge as it evolves, and MOC is a way to ensure that standard is met.

According to the ABMS, evidence supports the fact that board certification and MOC are associated with higher standards and better quality of care leading to improved patient outcomes. Many believe that by allowing MOC, it allows the profession itself to set its standards, lets hospital medical staffs set quality standards for their institutions and allows patients to know whether the physicians caring for them are up to date in their fields.

Physicians began to voice their objections to newer implementations of MOC in recent years, concerned that the new rules were making it more difficult to maintain existing board credentials. While most boards would require recertification somewhere between 8-10 years, the new MOC rules require physicians to complete stricter requirements every 2-3 years successfully. The concern was that this was forcing the physician to spend more time and energy towards the maintenance process rather than caring for patients.

Moreover, what became apparent over time was that specific boards appeared to be using MOC as a way to garner substantial fees from its members, leading to physicians accusing particular boards into running money-making schemes based on expensive and frequent testing fees. “People basically think [the MOC] is one big money-making racket for the certifying organization,” stated a frustrated pulmonologist.

The concern arose that increasing this time and financial burden on physicians would cause those physicians near retirement age to retire rather than renew, exacerbating the potential physician shortage and that rural area would be further under-served because if the hospitals and insurers required MOC, it could lead to difficulty attracting younger, well-qualified physicians.

In an extraordinary action in 2016, trustees of the Pennsylvania Medical Society adopted a vote of no confidence against the American Board of Internal Medicine (ABIM) and called for the entire leadership of the board to step down. The medical society stated that the ABIM process is “punitive,” “needlessly time-consuming and takes physicians away from their patients,” and “exorbitantly and unnecessarily expensive.”

Those opposed to MOC have broken away from the ABMS, leading to the formation of new certifying groups like the National Board of Physicians and Surgeons, the Association of American Physician and Surgeons, Practicing Physicians of America, and the Association of Independent Doctors. There have also been lawsuits filed, claiming that MOC rules restrain trade and potentially harm the careers of physicians. Other physicians have been contacting their state medical societies and legislators to ban mandatory MOC requirements by hospitals and insurers, with nine states now have passed laws that bar hospitals, insurers or licensing boards from requiring MOC participation, and another 17 states with active bills in discussion now.

The Texas bill, which had the support of the Texas Medical Association, passed in June 2017 and became effective on January 1, 2018. The law leaves it up to each hospital medical staff to decide if ABMS recertification is required for privileges.  Many physicians lobbied for the bill. One neurologist, who spent many days in the state capital working to pass the bill, stated: “I was angry that physicians were being forced to go through a process that was supposed to be voluntary.”

The argument against anti-MOC legislation is that it is interfering with the right of the profession to set its standards, interferes with the ability of hospital medical staffs to establish quality standards for their institutions and denies patients the right to know whether the specialists caring from them are up to date in their respective fields. There are still many groups that view board certification and the subsequent recertification as an essential component in meeting higher standards of quality care and are supportive of educational activities designed to assist physicians in these recertification efforts.

While the board that has raised the most concern, the ABIM, does not appear to be responding to its members concerns, other boards have realized the burden they placed on their members and have been active to listen to their membership and make changes, while still maintaining the goal to keep physicians up to date and providing high-quality care.

One example is the American Board of Surgery (ABS), which has changed the entire MOC process after surveying their membership. While it is still evolving and in its testing phase, the goal of the ABS is to lessen the burden on its surgeons, trying to design a process to provide flexible, high-quality, practice-related learning and assessment to support surgeons in an active process. This is not a perfect science. Mistakes will be made as this new system is enacted, eliminating the 10-year recertification exam. The next few years will be a crucial time for MOC. As the boards introduce these new reforms, they will have to convince physicians that the new process is useful and not overly time-consuming.

While some boards are making changes, others are not moving with the same drive and focus, frustrating members, and driving them to continue to rally against MOC in any form, including legislation to prevent hospitals and insurers from linking MOC to their ability to practice.

It is a complex debate. The physician community all agrees with the lifelong learner concept, and it is in its implementation where views differ. While the ABMS states it is trying to meet physicians at some compromise, the lack of effort and apparent focus on making money from specific boards under the oversight of the ABMS has only increased the divide. The hope is that those other boards that are making changes and leading the way will help breach that gap and unite physicians in their effort to continue to learn and evolve while continuing to provide high-quality care.

Please take a few minutes to complete our survey on Maintenance of Certification. 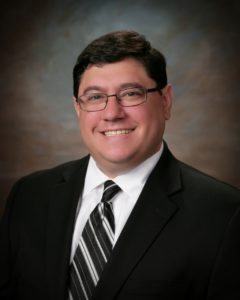 Ross F. Goldberg, MD, FACS is the Interim Vice-Chairman, Department of Surgery, and Chief of General Surgery at Maricopa Integrated Health System. He is also an Associate Professor of Surgery for both Creighton University School of Medicine and University of Arizona College of Medicine – Phoenix