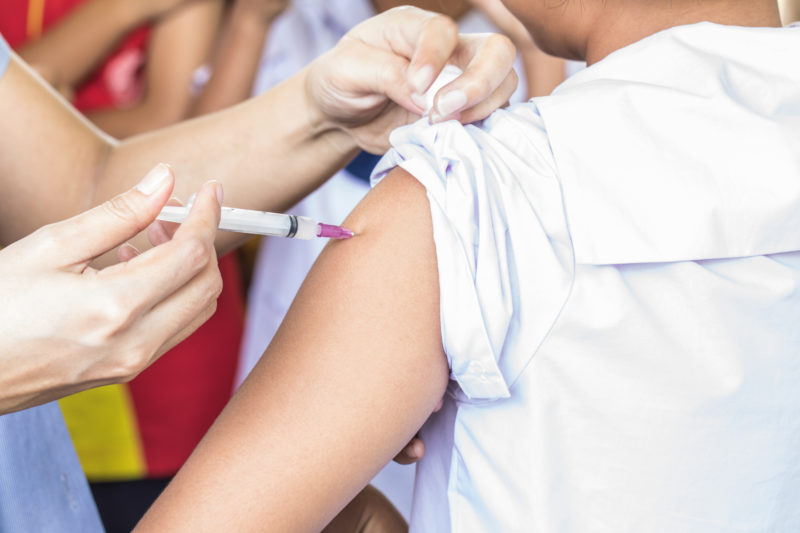 Personal belief exemptions from required vaccines have increased nearly 300% in Arizona since 20001. Back then, 1% of child care and 6th-grade students had a religious or personal beliefs exemption on file, while 1.4% of kindergartners were exempt from school-required vaccines due to personal beliefs.  As of 2017, exemptions had risen to 4.3% in child care and 5.4% in kindergarten and 6th grade (see graph). These percentages vary by school type, with significantly more charter school students exempt from vaccines compared with public schools. Increasing vaccine exemptions place more children at risk for catching and spreading vaccine-preventable diseases.

In a recent study on the eighteen states that allow for personal belief exemptions (also known as nonmedical exemptions [NMEs]), Arizona ties at 4th place for having the highest percentage of NMEs in kindergarteners.  The study found Maricopa County has the highest rate of NMEs among all of the studied metropolitan areas.

Arizona has had several measles outbreaks in the last decade.  In 2008, a traveler from Switzerland with measles exposed people in a hospital setting.  Five generations of measles cases resulted in fourteen people who were confirmed to have developed measles; all were unimmunized or had unknown vaccination status. The cost to two involved hospitals where many of these patients were seen was almost $800,000. Additional costs were borne by other community hospitals, outpatient offices, and state and county health departments.

In 2015-2016, Arizona had a measles outbreak linked to an outbreak at Disneyland.  Unimmunized members of a family who had traveled to Disneyland brought measles back to Arizona.  There were 7 cases of measles before the outbreak was controlled.  Fortunately, no one died in either outbreak.

People who are vaccine hesitant are often geographically clustered as to where they live and what schools they attend.  A measles outbreak in San Diego in 2008 (that cost an estimated $124,517 to stop) was worsened by clusters of intentionally unvaccinated children.

Vaccine hesitancy is increasing in the United States.  In a national telephone survey, approximately 3% of parents reported refusing all vaccines for their children and almost 20% had refused or delayed at least one of the recommended childhood vaccines.  In a survey by the American Academy of Pediatrics, 87% of pediatricians had encountered parents who refused a vaccine.  The most common reasons that parents refused vaccines were that they believed that vaccines were unnecessary and that they had concerns about autism.

Smallpox is the only vaccine-preventable disease of humans that has been eradicated.  Vaccination in the United States has resulted in a 99% decrease or more in many diseases.  However, these diseases will return if we do not maintain high levels of vaccination.  Many vaccine-preventable diseases are only an airplane ride away from us.  For example, although endemic measles was declared eliminated in the United States in 2000, hundreds of cases of measles are imported into the United States every year, requiring costly efforts to control the associated outbreaks.

Vaccines do not cause autism.  Twenty large epidemiologic studies done in several countries by multiple investigators have shown no links between autism and vaccines.  Yet people who are fearful about autism and other misconceptions continue not to vaccinate their children.

Vaccines are safe.  The Centers for Disease Control and Prevention (CDC) is constantly monitoring the safety of vaccines through the Vaccine Adverse Event Reporting System (VAERS), the Vaccine Safety Datalink (VSD), and the Clinical Immunization Safety Assessment Project (CISA).

Vaccine hesitancy is not limited to the United States.  For example, Europe is currently experiencing large outbreaks of measles with associated deaths.  Italy, Greece, and France have each had more than 2,500 cases of measles recorded from January through May 2018.  It is not surprising that France, which has some of the worst vaccination rates in Europe, ranks lowest among 67 countries for confidence in vaccine safety.   Low confidence in vaccines results in lower vaccination rates, increasing the risk of outbreaks.

Reducing vaccine hesitancy requires a multifaceted approach by providers:  giving strong recommendations for vaccines, addressing concerns about vaccine safety and efficacy, correcting misconceptions about vaccines, and explaining how serious diseases can occur without vaccination.  Resources for educating patients and parents can be found on the CDC website.

I like the quote:  “There goes another beautiful theory about to be murdered by a brutal gang of facts.”   Bacteria and viruses do not care if someone does not believe in vaccinations.  They will infect anyone in their path who is susceptible.  As healthcare professionals, we need to continue to be committed to vaccinate patients and to support vaccination efforts.  The disease is bad.  Vaccines are good.

1Arizona law states that children in school or child care facilities must receive required vaccines in order to attend.  Although the law permits parents to obtain vaccine exemptions for their children who attend child care facilities (due to religious beliefs or medical condition) and school (due to personal beliefs or medical condition), exempted children could be excluded from school if there is a disease outbreak. 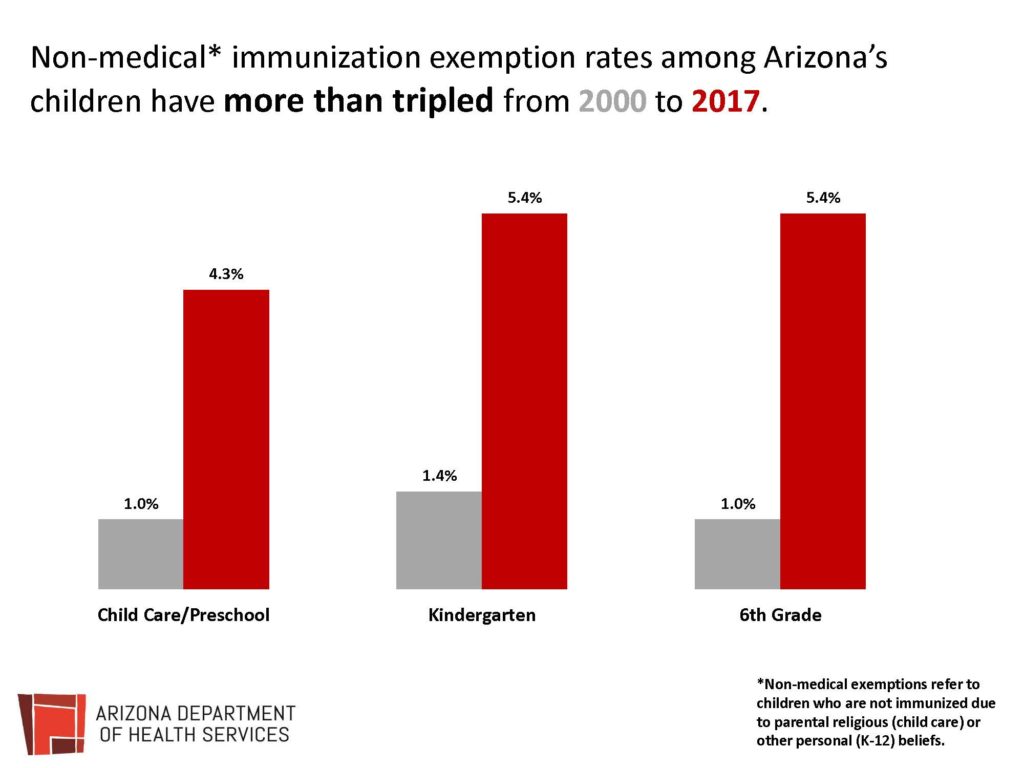 Physician Advocacy: It All Starts With Engagement

Author AZPulsePosted on March 2018April 2018
Written By: Lisa Villarroel, MD, MPH When a pregnant woman has a fatal seizure, her death is reviewed. When a woman hemorrhages during childbirth,...
Read More